← Back to the Sequel
I Want to Start Over—Mad Men Season 7, Episode 13—The Milk and Honey Route →

I Don’t Think It Works Like That—Mad Men Season 7, Episode 14—Person to Person 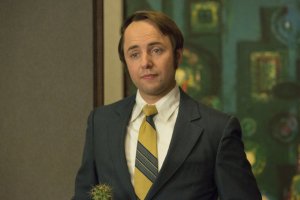 What does a cactus have to do with Wichita?

Sooner or later, everything ends. Sometimes it ends while you’re sharing a plate of onion rings with your family at one of New Jersey’s best diners. Sometimes it ends with life simply moving on as people slide into new positions recently vacated by others, like the world is some kind of complex ecosystem. And sometimes it concludes with the Hollywood ending you always wanted and you die surrounded by the empire you created as cops rush the scene. Mad Men ended tonight, and many will say that the golden age of television drama ended with it. To an extent that may be true—I don’t know that we’ll necessarily see a show quite like Mad Men (or The Sopranos, or The Wire, or Breaking Bad) ever again—but there is still great television being made right now and there will still be great television in the future. But Mad Men was unique in so many ways—it meandered, it took its time, it often confounded viewers, and it was never afraid to get weird. It was one of a kind, and for that reason, I guess it shouldn’t surprise me that its finale was totally unique as well.

Don never made it back to New York (at least not on camera). He found out Betty was dying and seemed to make a half-hearted plea to raise their sons, but as soon as Betty reminded him that he wasn’t a big part of their lives to begin with he almost instantly seemed to know that she was right. Instead, he finally makes his way to California and meets up with Anna Draper’s niece, Stephanie (and I have to admit that I did not expect to see Stephanie in this final episode). He joins Stephanie on some kind of self-help yoga retreat in the California wilderness. She’s given away her child, just like Peggy, and the kid will grow up without his mother, just like a young Don Draper/Dick Whitman. Don seems eager to try to shed the last vestige of his past when he offers to give Stephanie Anna’s ring. “Move forward,” he tells her (the same advice he gave Peggy in the hospital after she gave birth), but Stephanie isn’t taking his words of wisdom, “I don’t think it works like that,” she tells him.

I’ll be honest, at this time, I’m not exactly sure what Don found on that retreat, or if he even found anything at all. It’s almost like when Tony Soprano looked out over the Las Vegas desert while high on peyote and screamed, “I get it!” Did he come to the conclusion that he was just like Leonard, the everyman who should be happier—the guy who said his family looks at him, but never really sees him? And if Don did reach some kind of epiphany, would he really just turn around, turn it into an advertisement, and sell it back to McCann? Did he even dream up the famous coke commercial to begin with? Or did he think “I’m just like this guy Leonard, people can’t really see me for who I am, I don’t even know if I can see myself for who I am, I’ve failed with my family over and over again, but my one real talent is creating advertisements, it’s what I do, and I have to go back with this idea.” My guess is that this is going to be Matt Weiner’s version of The Soprano’s cut-to-black finale—fans will be debating what that final scene means for years. And there’s no clear answer (or at least to me there’s no clear answer), which makes it both great and frustrating at the same time. For eight years, Mad Men has been asking us whether people can change, now it’s all over—my feeling is that it’s pretty optimistic in its belief that people, in general, can change. But what about Don? I’m still just not sure.

The rest of the episode seemed far less ambiguous and almost a little tidier than I expected. Joan’s boyfriend, Richard, leaves her because he still can’t grasp the concept that she’d rather work than travel the world with him—so she starts Holloway & Harris, a production company where she won’t have to answer to anyone. When we last see Joan she’s using her babysitter as a secretary and running the operation out of her home, which may seem small time, but it’s worth remembering that Sterling Cooper Draper Pryce’s headquarters was originally located in a hotel suite. Something tells me that Joan is going to be just fine. Roger seems happy too. He’s going to marry Marie Calvet. The absurdity of this situation seems to suit Roger well. Even he’s amazed at how little anyone cares, and he gets one last “Roger joke” in as he refers to Marie as his mother as they sit together in a café. I don’t know that I have much faith in Roger and Marie’s relationship long-term, considering what we know about both characters. Nevertheless, I think this was a fitting way for Roger Sterling to go out.

My guess is that fans of the show felt that Peggy and Stan also went out in the best way possible. There has been undeniable chemistry between the two ever since they were naked in that hotel room together back in season four, so it’s not exactly surprising that they’d end up together in the finale. Call me unsentimental, however, but I was a little lukewarm on the pairing (I didn’t hate it, I was just lukewarm on it). I just couldn’t help but watch the scene when Peggy and Stan confess their love for one another and think that it was a little beneath Mad Men (although the fact that it didn’t come across as a typically graceful confession was pretty great). Two weeks ago, I was left thinking that all Peggy really needed in life was her octopus painting. Her ending wasn’t bad, it just was more traditional than I expected, but that’s also okay—Peggy Olson has always been the character that Mad Men has viewed with the most hope. It makes sense that she’d get the happiest ending.

It’s hard to believe that it’s all over. I’ve heard many people say that to watch Mad Men is to look back on your own life, and it’s true. When this show premiered eight years ago I was graduating from high school! Since then there have been graduations, birthdays, and funerals in my life. I’ve moved to New York, left, and moved back again. I remember first watching “The Wheel,” while I was on a transcontinental flight back to America in 2009. It’s great how the characters changed, but always seemed to grow into different versions of themselves. And this is what happens in real life too! Take a look at an old year book, or a photo album, or an old picture on facebook, and you’ll see the same thing—you’re still you, but you’ve also changed. I keep thinking about Betty’s letter to Sally last week as the perfect illustration of this. On one hand, she acknowledges that she understands Sally and that she’s no longer afraid for her. She tells her to embrace the adventure. On the other hand, a large part of that letter is devoted to telling Sally how Betty wants to look at her funeral—Betty’s definitely changed, but she’s still Betty.

I’ve watched these characters make progress and then backslide so many times throughout the years that sometimes I almost feel like I can see little parts of myself in them. That might sound weird, and I don’t think that by watching Mad Men I’m fulfilling some kind of fantasy where I get to see myself on t.v. (I’m pretty sure I’d never want to see that), but it has led me to grow more attached to Mad Men than perhaps any other show I’ve ever watched. When you strip everything else away, the big ideas that Mad Men dealt with—personal identity, happiness, and fulfillment—are so universal, it’s hard not to relate at least a little on a personal level. For eight years, fans of Mad Men tuned in to watch something that they knew was special and unique. So many times it swung for the fences and delivered great moments. You almost want to buy the world a coke just thinking about it.