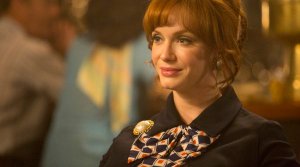 Jim Hobart doesn’t give Joan an account. What’s her future at McCann?

I’m guessing that for all the people out there who have been disappointed in this final half-season of Mad Men up to this point, “Time & Life” was a welcome episode. It’s one of the more heavily plot-driven Mad Men hours in recent memory and it mostly eschews minor characters and subplots, and focuses on people we’ve known and cared about for much of the show’s run. Pete Campbell even flipped the script and got to punch someone, so we’ve got that going for us, which is good.

Remember how season seven’s midseason finale was titled “Waterloo?” Well we didn’t know it at the time, but Roger’s decision to make Sterling Cooper & Partners an independent subsidiary of McCann really did mark the end of the agency. In a sense, that episode was the characters’ last stand, while this one represented their ultimate defeat. SC&P is no more, dissolved and swallowed up by McCann Erickson, like a fish by a whale. At first, Don, Roger, and the other partners try to pull off a desperation Hail Mary, much like they did in season’s three’s “Shut the Door, Have a Seat,” and season six’s “For Immediate Release,” (and even in “Waterloo” itself), by planning to move to SC&P West’s office with their accounts that have conflicts with McCann’s existing clients. However, this time, there’s no Lane Pryce around to fire them, there’s no merger, there’s no bigger company to buy them out. This time, the deal has been done—they’re trapped.

I’m actually glad that Don’s dream of moving the partners and some of their accounts to California didn’t come to fruition. We’ve seen that kind of “re-up to preserve the status quo” story several times on this show, and with only three episodes left, I don’t think it would have worked well to go in that direction again. Plus, California has always kind of been a new frontier for Don—a place where he could escape from reality and run from his problems back in New York (although one could argue that this hasn’t been the case as much ever since Anna Draper died in season four). Now that door has basically closed for Don. It’ll be more interesting to see what he and the partners do now that they don’t have the option to run anymore. They have no choice but to face reality. They’ve died and gone to advertising heaven, as Jim Hobart puts it. And it’s true—Don, Roger, Pete, and Joan have been defined by what they’ve built at SC&P, and now that that’s gone, a part of them is too. But are they in heaven?—that part is debatable. McCann didn’t respect the idea of SC&P as an independent subsidiary for long, who’s to say that they’ll accept Don working on Coca-Cola, or Roger handling Buick for very long either.

The other main storyline tonight involved Peggy and her choice to give her child up for adoption. Over the course of the episode, Peggy found herself in several situations that forced her to ponder her life not lived—first, in a brief scene with Pete, then with a small girl whose mom has left her at an audition, and finally with Stan. While we’ve seen Peggy interact with children on this show before (especially while in Pete’s presence), we’ve never seen her talk to someone like she did with Stan tonight about her decision to give up her child. I liked how Peggy kind of dances around the details of the story when Stan asks her what she did, but she gives him enough information so that he knows what’s going on. I imagine that would be a pretty realistic response from someone who has been hiding a painful secret for a long time. I also like how she tells Stan that she doesn’t know how her son is doing, not because she doesn’t care, but because she can’t know because that’s the only way she’ll be able to move on. This echoes back to what Don told Peggy while visiting her in the hospital—“get out of here and move on. This never happened. It will shock you how much this never happened.” Just as Don sometimes seems to be filling Roger’s old role, Peggy sometimes seems to be filling Don’s.

Meanwhile, as is often the case on Mad Men, Pete Campbell’s difficulties mirror Peggy’s in this episode. While he technically maintains some presence in his daughter’s life, she isn’t getting into Greenwich Country Day in part because she can’t properly draw a picture of a man, and even when Pete comes back to his former home in Cos Cob, he insists on leaving before Tammy gets back from the park. It’s no wonder she can’t draw a man—Pete would rather save the Seacor Laxative account than his relationship with his own daughter.

So will “Time & Life” quiet some of the negative chatter surrounding this final half-season of Mad Men? I still have no idea how the series will end (and that’s good, I prefer it that way), but this was the first episode of the final seven where I feel like Weiner and the other writers can’t be accused of wheel-spinning and focusing on the “wrong” characters. They’ve given us a major plot point and at least suggested new directions for many of the show’s main characters; while, at the same time, making it feel like things are starting to wind down. Only three episodes to go. Lets see how it all plays out.